The other day my daughter and I decided to attend the Fan Expo in Boston. There was a certain actor I wanted to meet and begged my daughter to attend. I have only been to one other fan expo and that was to meet Stephen Amell. He has always been my muse for Liam Page and a friend had met him and had him sign a copy of Forever My Girl for me. I found out he was going to be in Montreal and I had to go! Why – because he needed his own copy of Forever My Girl and I secretly wanted him to play Liam in the movie.

I had no idea what to expect when I walked up 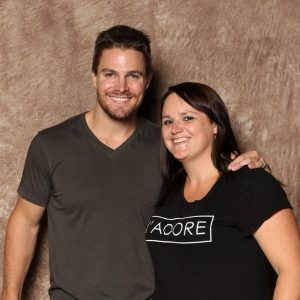 to Stephen, but as soon I showed him the book, he knew exactly who I was. It was amazing. He asked if the copy was for him and I gladly handed it over. We spoke for a few minutes – it was great! About an hour later, it was time for our photo op. I was so nervous walking in but he remembered me (after seeing hundreds of others) and we spoke for another few minutes before we took a picture and I was on my way.

Going into this fan expo, I had high hopes. The same expectations from when I met Amell. I was going so I could meet Michael J Fox – the guy whose face covered my walls when I was in middle school – the man who could make me watch any show or movie simply because he was in it. My daughter, on the other hand, she was going to meet the Phelps twins, aka, George and Fred Weasley. Being huge Harry Potter fans we geeked out a little bit on this one.

Our day starts with rain. It’s almost eighty out and pouring. Typical New England weather. The convention center was a madhouse and we stressed that we’d be in line with forever with the Teen Titans, Death Eaters, and Harley Quinns, but we decided to leave our bags in the car. Major bonus – since no bags, meant no line!

We found the Michael J Fox autograph line and took our spot. The line was long and panic started to set in that we’d miss our photo op with the twins. After explaining our dilemma to one of the workers, he promised we’d get through this line in fifteen minutes. We had total doubt, but he was right.

My moment is coming. I get to tell the man who I have liked for most of my life, all about my middle school bedroom, I get to thank him for coming and tell him how much I loved all his shows… because I got to do this with Amell.

Not only do they rush you through an autograph line, but the woman in front of me stopped… she STOPPED and blocked my chance to stand in front of Fox! My attempt to have a conversation thwarted! This wasn’t going to deter me. I would speak to him when we had our photo op. Problem solved.

My daughter and I got in line to meet the twins. We practiced what we were going to say. Like how she went to the Harry Potter Studio when she was in London. She was going to show them a picture she took of their characters.

It’s our turn. The lines move incredibly fast. Do you want to know why?

Because you’re not allowed to breathe, blink, adjust your hair, clothes or even say hi! Like nothing. The person behind the camera says something like look here, snap, next. That fast!

The heartbreak set in fairly fast. I was never going to be able to tell Fox about… everything. Still, I was determined, that when I walked into his booth for our picture, I’d tell him how much I’ve enjoyed his career.

I’m a dreamer. What can I say? This dream, however, did not come true.

The most important thing I had to remember is that this man suffers from Parkinson’s. Twenty-seven years, he’s lived with this disease. He’s not the Alex P Keaton, Marty McFly, the Michael Flaherty or Scott Howard – the teen who made it cool to be a werewolf – he’s a guy who sometimes has trouble speaking and controlling his movements.

He sat on a chair and graciously smiled at each person or party of people that approached him. Touching wasn’t off limits, but it had to be done lightly because too much pressure could hurt him.

I don’t know how he did it or continues to do it. He’s been on these tours since April, promoting Back to the Future, doing autograph sessions, Q & A panels and multiple photo ops, all while dealing with Parkinson’s. 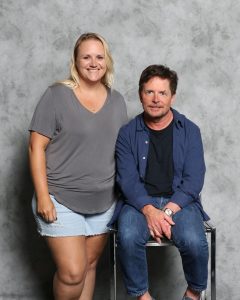 In the end, our picture together is great. He’s smiling. I’m smiling. No, I didn’t get to tell him about my bedroom walls were covered floor to ceiling with his pictures or that I’ve seen every television show and movie he’s been in. Something tells me, he knows.

Want to see my picture with Fred & George Weasley, aka Oliver and James Phelps, head on over to my Instagram.

« Christmas with You Anthology
Chasing My Forever Promo Opportunities »